Check out the latest additions to the oldest Olivia Wilde gallery on the web hosting over 45,000 photos and still counting!
EST. APRIL 2007 | The longest running fan source dedicated to the career of the talented Olivia Wilde Visit Photo archive
now viewing mobile site

CHARLOTTESVILLE, Va. — If you live in a swing district and it’s October of an even numbered year, you’re bound to get strangers knocking on your door asking for your vote. But if you’re in the right place at the right time, that stranger is actress Olivia Wilde, who has appeared in everything from “BoJack Horseman” to “Tron.” And if you ask nicely, she’ll send over her partner, “Saturday Night Live” alumn Jason Sudeikis, who is across the street with woke pro football player Chris Long, the son of NFL legend and Charlottesville resident Howie Long. That’s who greeted Nancy Braier when she opened her door Sunday, along with the congressional candidate herself, Democrat Leslie Cockburn, who also happens to be Wilde’s mother.

“Is this really happening?!” Braier said, clutching her face in joy and disbelief.

Republican admakers have long tarred Democrats for associations with “Hollywood liberals,” and especially now in the cultural wars of Donald Trump’s America, never mind that he’s a former reality TV star who hosted Kanye West last week. But would the attacks be any different if the celebrity were an immediate family members? The answer, as it turns out, is no. Read more.

“The fact that Washington, D.C., resident Leslie Cockburn thinks that bringing in a couple of Hollywood liberals to Southside Virginia is a good idea shows just how out of touch she is,” said John March, a spokesperson for the Virginia Republican Party.

If anything, for Republicans, the familial ties just further underscore the elitist image they’re trying to paint of Cockburn. On Saturday, the state GOP even went so far as to say she “hates veterans” and “hates America.”

The Cockburns, both political journalists, raised their children in a Washington where visits were common from people like the late essayist Christopher Hitchens, diplomat Richard Holbrooke and rock star Mick Jagger, whom Wilde once ordered out of her chair. Wilde (stage name) went on to marry the son of an Italian prince before getting together with Sudeikis, with whom she has two children.

But Wilde brushed aside the elitism charges while sitting with Sudeikis for an interview with NBC News as hundreds lined up for a rally for her mother.

“I see that as a desperate attempt to explain why there is an incredible groundswell of support around this campaign,” she said. “I’m sure they’re panicked. Because Trump won this district by 11 points and now this race is neck-and-neck.”

She added that her mother’s background in journalism trained her to be a good listener, which is often lacking in politics, and that she admired her mom for taking a risk after a long career, instead of retiring in comfort and resting on her laurels.

“She’s fearless and tireless and determined and that is what it takes to succeed,” Wilde said.

Her partner, Sudeikis, sporting American flag socks and a flat cap, agreed. “Anybody that would stand outside and have a perception of us, they don’t understand where we’re coming from, because it’s not Hollywood,” he said, noting that he’s from Kansas and that they live in Brooklyn.

Kurt Bardella, a former Republican operative who switched teams under Trump, has been critical of Democrats’ Hollywood-inspired messaging, which he says doesn’t appeal to middle-class voters. But he said he thought Republicans look “ridiculous” for going after Wilde, “given their own constant rhetoric about family values.”

A tiny fraction Hollywood executives and entertainers donated money to Republicans this year, according to the Hollywood Reporter, though Trump insists they love him.

“I have many friends out there, many Hollywood friends,” he told Fox News Thursday, promising many will secretly vote for him.

This site uses Akismet to reduce spam. Learn how your comment data is processed. 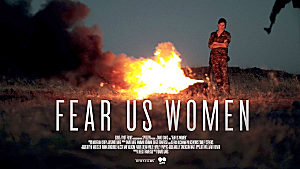 Fear Us Women [2017]
A member of an all-female Kurdish army, Hanna Bohman gives a look at the brave women fighting for liberation in one of the world's most dangerous countries.

Amazon's RED Shopathon PSA
Every purchase made from this special curated collection of red products helps fight AIDS in Africa. And for every dollar spent during the Shopathon, Bank of America will donate $.30 to the Global Fight to End AIDS (up to $1.5 million).

A Vigilante [2018]
Actor - A once domestically abused woman, Sadie, devotes herself to ridding victims of their domestic abusers while hunting down the husband she must kill to truly be free.
News:Photos:More info

Life Itself [2018]
Actor - A lovestruck couple become the catalyst for a multi-generational relationship drama, with the characters connected by a tragic event.
News:Photos:More info

Booksmart [2019]
Director - Two academic superstars and best friends are determined to cram four years of fun into one night on the eve of their high school graduation.
News:Photos:More info


Olivia Wilde Network is a non-profit website. We do not claim ownership of any photos in the gallery, all images are being used under Fair Copyright Law 107 & belong to their rightful owners. All other content & graphics are copyrighted to this site unless otherwise stated. If you would like any media removed please contact us before taking legal action.

© 2007-2019 Olivia Wilde Network   |   Olivia-Wilde.net   |   Theme by Sin21   |   Back to top   |   Homepage   |   Disclaimer & Privacy Policy Olivia Wilde Network located at olivia-wilde.net is a non-profit site, Olivia knows about the existence of this site and approves of it. All images, video footage and other media are copyrighted to their respective owners, no copyright infringement is intended. We do not claim ownership of any photos in the gallery, all images are being used under Fair Copyright Law 107 and belong to their rightful owners. All other content and graphics are copyrighted to katherinelangford.net unless otherwise stated. If you would like any media removed please contact us before taking legal action. Thank you!